Greater New Orleans often receives rainfall faster than the rate at which existing drainage systems can remove it. Insurance claims, commutes and shopping trips postponed, trips to the mechanic to repair flooded vehicles, moldy drywall, and impassable roadways make up the tally of “everyday” disasters that accompany rain events. Flooding due to rainfall will cost Greater New Orleans an estimated $8 billion over the next fifty years.

The map above shows average annual precipitation in inches. The dark blue areas are the wettest. Greater New Orleans receives over 60 inches of rain annually, one of the highest annual totals in the country.

Seasonal variations in rainfall and severe weather affect surface water and groundwater levels throughout the region. The highest incidence of thunderstorms and rainfall (the blue peak above) coincide with early hurricane season and high summer temperatures. 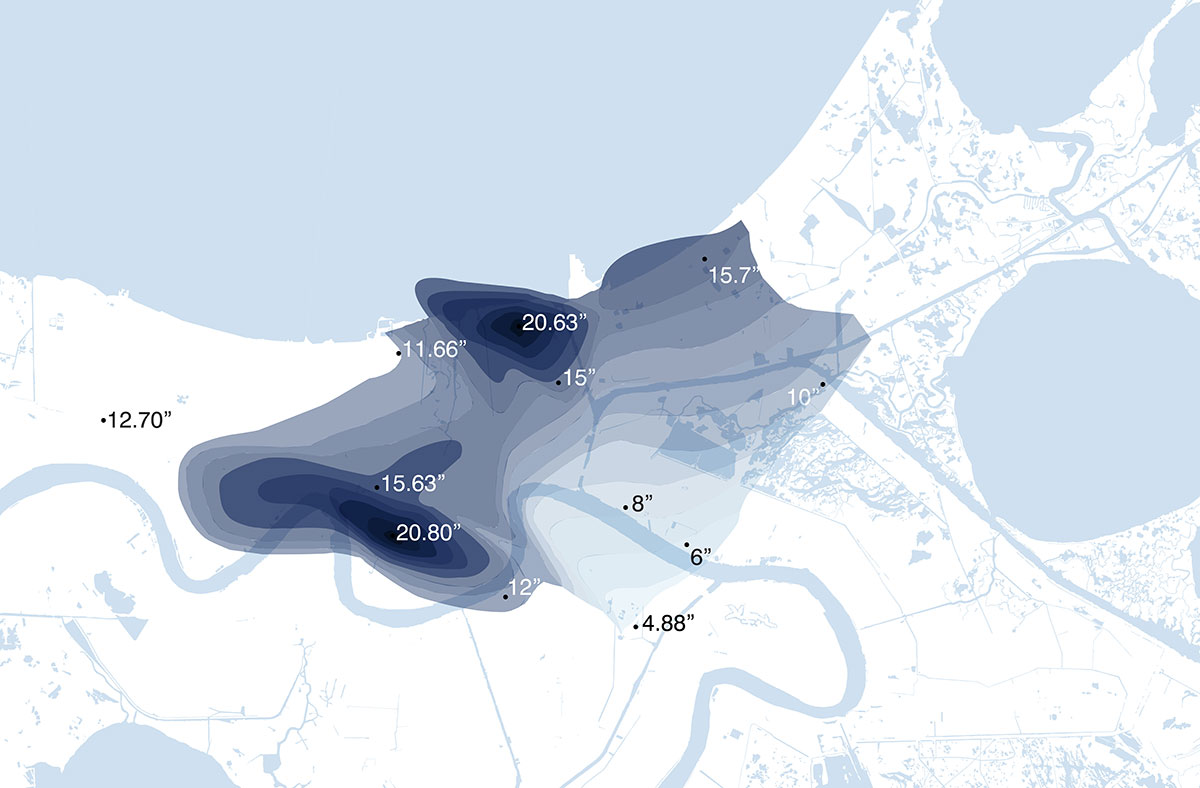 May 8, 1995 Thunderstorm. Rain falls at different rates in different areas. The map above shows rainfall for the record-breaking storm of May 8, 1995, which caused significant flooding throughout the region. Audubon and Pontchartrain Parks experienced the most intense rainfall, with totals exceeding 20” over 24 hours.

Predicted flooding from a “10-year storm,” based on hydraulic modeling, for an event that has a 10% chance of occurring or being exceeded any given year. In New Orleans, a 10-year storm has an average total rainfall of 8.5 inches, with a peak hour total of 3.43 inches.

The uneven distribution of rainfall during storms stresses drainage systems by placing heavy loads on different points in the system, so that the sizing of catch basins, pipes, and pumps can at any moment be rendered inadequate. It is not uncommon for one neighborhood to experience a mere drizzle while another neighborhood experiences a deluge and flash flooding.